October is here – And so is the long awaited return of Dirty Teacup Designs at First Friday! (Okay, maybe not so much – but some people might care.)

In the past 3 months, I’m quite honestly a little proud of myself & shocked that I have finished so many new pieces that will be debuting this Friday! After getting all my prints made yesterday on GLORIOUS, GLOSSY new paper; I have discovered that I have precisely 1 million new prints for all you boys & ghouls who have a hankering for more of my weird artwork. I’d say a majority of it is essentially Halloween-y in tone, but this is also the year round norm.

Find me at these shows this month for all my latest art & some Halloween treats (seriously, I made up little tiny pumpkins loaded with candy, balloons, dirty teacup pins & creepy confetti – so come get them!) Be sure to follow me on Instagram & Facebook for all the latest show updates! 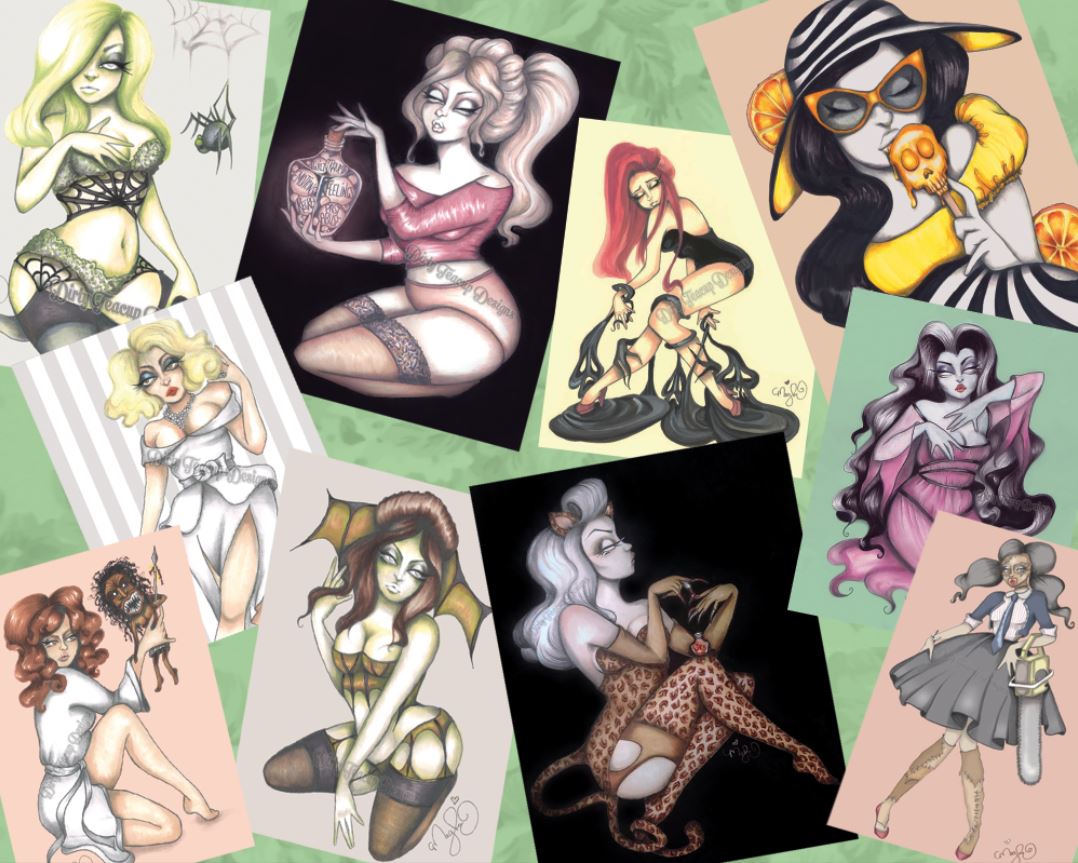 Celebrate with some arsenic on the rocks! 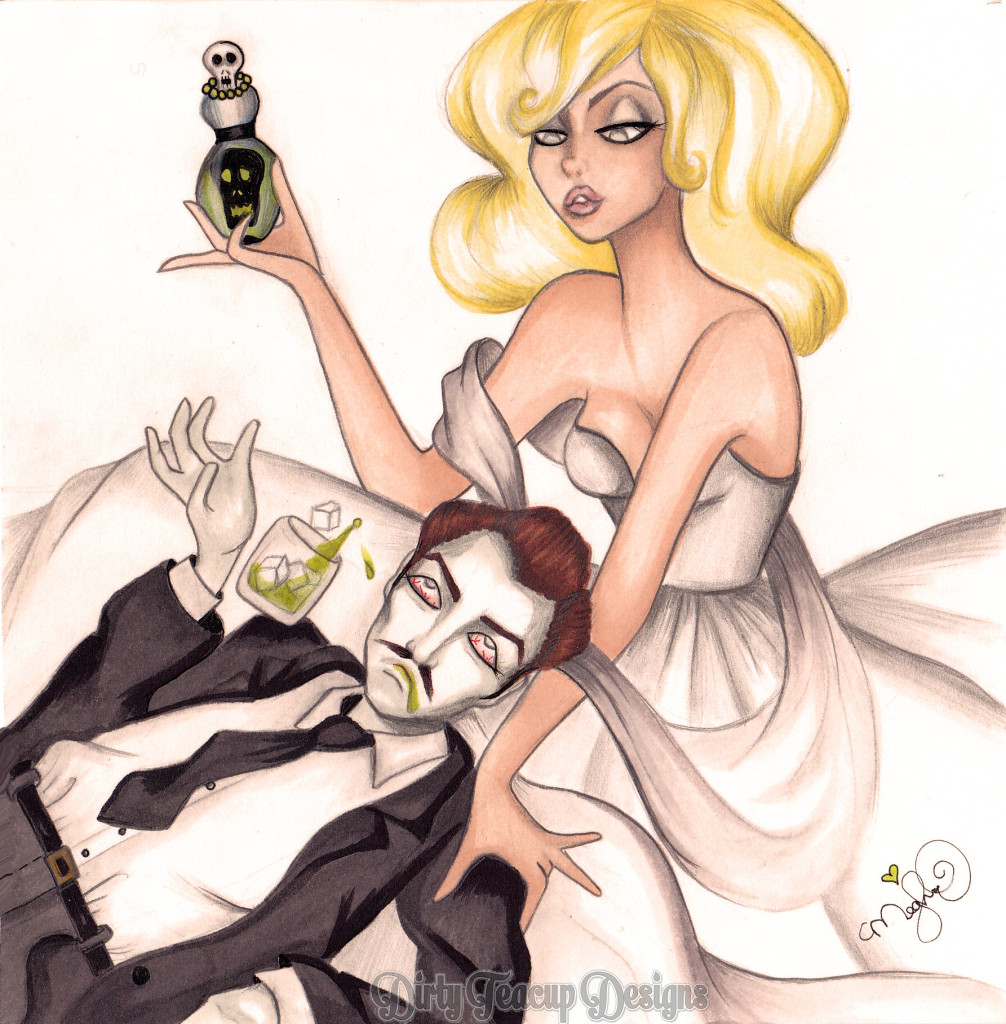 There will be even more events to be announced for October 2015, so stay tuned! 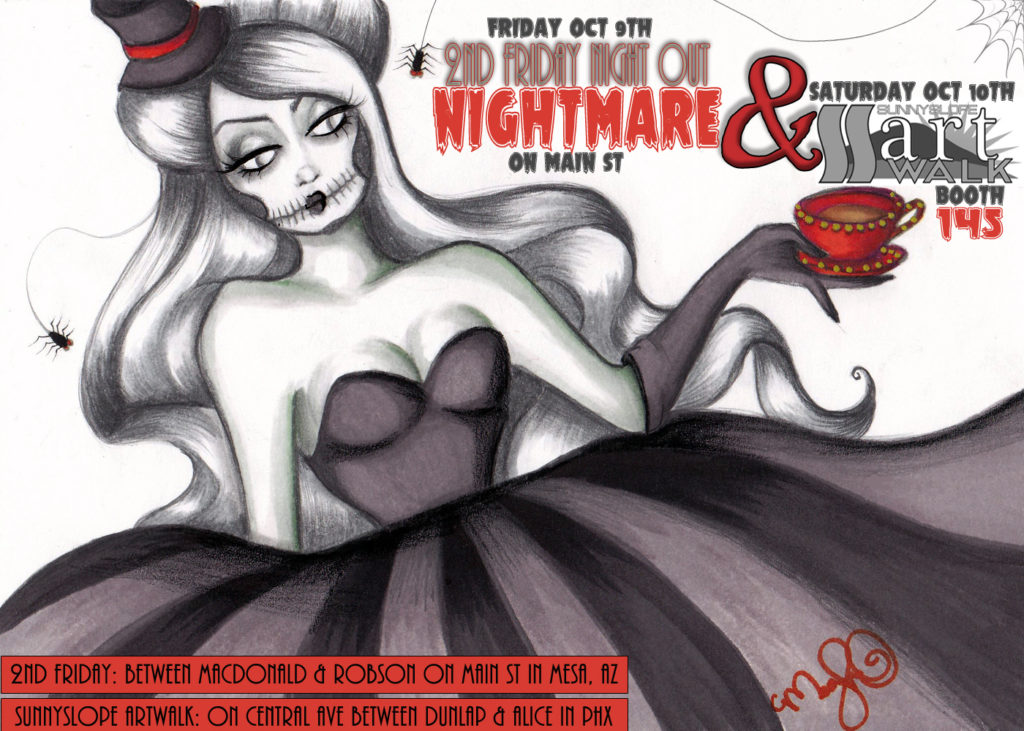 Also, on October 9th & 10th 2015,  Dirty Teacup Designs will be attending two Halloween-themed art shows: 2nd Friday Night Out in Mesa Friday, the 9th from 6-10pm & Sunnyslope Art Walk in Phoenix on Saturday from 5-10pm! Head on out and come see me!

Dirty Teacup is the idea of two seemingly unrelated entities fusing together. Something delicate, feminine and presumably beautiful blended seamlessly with the macabre, ominous or peculiar.

All illustrations created by Meghan O’Connell of Dirty Teacup Designs.

The 4th and newest installment of the “Domestic Bliss” series is now complete! “A Domestic Bliss Hallows’ Eve” depicts all 3 ladies all decked out in their elegant Halloween costumes. Each lady has elements indicative of their style throughout the “Domestic Bliss” series. Claudia, dressed as a seductive bunny, carving a pumpkin with her lustrous ax; Katia as the Bride of Frankenstein, teasing her beloved dog, Andre (wearing a pint sized monster costume!), with the arm of her long gone significant other, Ivan. And of course, Mathilda, dressed as a sorceress, boning up on her body disposal knowledge, as she brews up a deadly, bubbly brew – with the severed head of her husband by her side.

Being an avid fan of everything Halloween, (So much so my Halloween decor completely flooded my living room promptly at the end of September) I felt like a piece such as this was a must. Out of all the pieces I’ve made, the very first collection I created – Domestic Bliss – is the one that is closest to my heart, as is this time of year.

I wanted all of the Domestic Bliss gals to have elements that everyone is familiar with from the originals, keeping the personalities I envision them having intact, I wanted to put myself in their mindset and figure out what they, as characters, would want to wear on Halloween…

Claudia, I’ve always seen as the seductress. A Playboy-esque, masked ensemble seemed like it would be right up her ally. Her penchant for storing body parts in large trunks in her boudoir, gave me the idea to let her carve a Jack-O-Lantern fit for storing those pesky body parts that all the Domestic Bliss girls have lying around.

Katia is the most playful of the bunch, almost child-like, despite her age. The kind of girl that would see a fence & wouldn’t bother with something as mundane as opening the latch & walking out, but rather by daintily swinging it open. Her love of old monster movies was the deciding factor of her costume, the Bride of Frankenstein, especially since this would give her the opportunity to dress up her dog, Andre, as the Frankenstein monster! As a Halloween doggy treat, she dug a piece of Ivan out to dangle in front him.

Mathilda is the most “domestic” of the bunch. She loves cooking, whether it be bacon & eggs or sautéed severed fingers & decapitated head smoothies. How fitting would it be for her to be a sorceress & to have a bubbling cauldron at her disposal? After her attempts of getting rid of her dead fellas head, perhaps a potion in her new favorite book would have some clues for her. Not only is the cauldron a nod to Mathilda’s love of cooking, but also to one of the Dirty Teacup Designs mascots, Arnold. He’s usually found in an abnormally large teacup whenever I am selling my art in person. Those who have seen my display in person know Arnold quite well!

So take a stroll through a ghastly, gated pumpkin patch to get a glimpse of the lovely murderesses of the “Domestic Bliss” series: Claudia, Katia & Mathilda on Halloween night! This is probably my most favorite piece to date, & I truly hope you guys enjoy it. Whether Halloween holds a special place in your heart, or if you’re a fan of the series.

Prints are available exclusively here in the shop. I’ll also be debuting them in person on First Friday at Revolver Records tomorrow! Happy October, guys & ghouls!